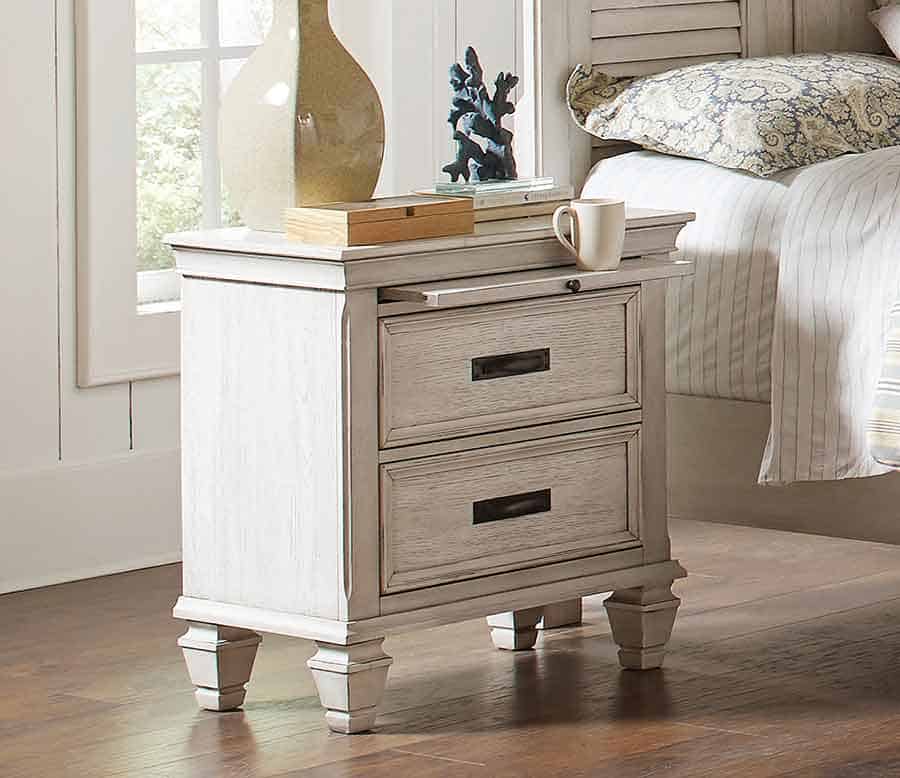 Nightstands and end tables are similar pieces of furniture, but one is meant for the bedroom, and one is meant for family and living rooms. Size is important, especially height since they need to be fully accessible from either your sofa or chair or next to your bed.

If you’re in the market for a new nightstand or end table or looking to swap the two in your home, then the height factor is no doubt on your radar. Keep reading for more on whether or not nightstands and end tables are the same height.

Are Nightstands and End Tables the Same Height?

When you purchase an end table or nightstand from the store, unless it’s a special sized model, both pieces of furniture will be the same height, at 25” tall. But each of these items is intended for use as a functional piece of furniture, so whether or not you keep your nightstand or end table at 25” depends on where you’re using it.

A nightstand, also called a bedside table, goes next to your bed. The typical nightstand has a flat surface on the top that’s intended for storing things you’ll need at night, such as a book or your phone. There’s usually enough surface area for a lamp, but not much more.

Aside from the tabletop space, the average nightstand has two or three drawers that can be used to store whatever you want, such as nighttime essentials or toiletries. Because of these drawers, many nightstands end up looking like a solid block of wood with drawers put in instead of a table.

While 25” is standard, it possible to find taller nightstands since bed frames can vary greatly in height. Some of them being very close to the ground and others being up to three and a half feet off the ground.

Like a nightstand, end tables have a flat surface ideal for the placement of anything small, like remotes or phones. End tables are more likely to have decorative objects on top. Similar to nightstands, there’s typically enough room for a lamp.

Nightstands will usually have two drawers for extra storage, end tables typically have only one drawer underneath the tabletop surface. Many end tables don’t have any drawers at all.

Because of the smaller number of drawers, end tables end up looking more like miniature tables. Along with the more table-like look, end tables tend to be deeper than nightstands. This is most likely because there are fewer drawers, so the deeper drawers make up for less storage space.

Also, while nightstands tend to vary in height, end tables tend to have less. This is because sofas, while having some height variation, ultimately don’t vary as much as beds do.

Are Nightstands and End Tables Interchangeable?

Does the Height Fit Your Couch or Bed?

The height of these tables is calculated, so they rest relatively at the same level as the bed or sofa arm. A table that’s too short can lead to awkward fishing for the object you want, while a table that’s too tall will have the same issue, albeit for a different reason.

So, if you see an end table that goes perfectly with your bedroom décor, then you’ll need to make sure the end table’s height is compatible enough with your bed that it won’t be awkward to use.

Does it Fit Your Design Style?

Another aspect to consider is the aesthetic issue. Nightstands tend to look bulkier because of the extra drawer. This extra bulkiness might not look too aesthetically pleasing in the middle of a living room.

On the flip side, an end table with a single drawer might leave a bunch of extra space at the bottom of the table, looking like there’s a lot more empty space.

Does it Take Up Too Much Space?

Another issue to consider is the depth of the table. If a nightstand or end table has more depth, the surface area on top will be larger. This is great if you have to grab and go items that just need a short-term home. If you want to store things permanently, then drawers are a better option.

Does it Fit Your Budget?

Purchasing a new nightstand or end table might just not be in the cards at the moment when you really need one. In that case, work with what you’ve got.

While it should be fairly easy to use an end table and a nightstand interchangeably, don’t let the price be the sole guidance for whether you buy it or not. Consider the table’s compatibility with your needs and the look you’re going for.

Converting One into the Other

If you have an end table that matches your room décor but is just shy of being a comfortable height to hold nighttime books, you can simply put decorative blocks or other add-ons like switchable feet at the bottom of the legs of the end table to elevate it to the height you need.

This works both ways. If there’s a nightstand that’s a little too tall for your sofa’s side but is otherwise perfect, you can saw the legs down and then repaint over the construction area to get it down to size.

If you’re not one for hands-on crafts, it doesn’t mean all hopes are lost. Using a thinner mattress on your bed can help lower the height, compensating for the lack of height in your end table.

For a too tall nightstand, you could add cushions to your sofa to give the person the extra height needed to make the nightstand work.

If the aesthetically fitting end table doesn’t have enough drawers, you can add a basket that slides into the empty space at the bottom. Add a lid, and it’ll hide the objects in the basket. If you’re creative and dedicated, most end tables and nightstands can be altered to fit your needs.

While often mistaken for being the same item of furniture, end tables and nightstands are actually two different items of décor. While they serve very similar purposes, they also have noticeable differences.

While both items have a standard height, the heights of these tables differ from table to table. Bedside tables tend to be thinner with more drawers, while end tables are more likely to be shorter with extra space on the bottom. However, the two tables are similar enough that they can be used interchangeably.

link to Nightstand vs. End Table: Do You Know the Difference?

Have you ever walked into your bedroom and thought that maybe something just looked off? Furniture, like nightstands, are very rarely adjustable, so what are you supposed to do if your nightstand is...