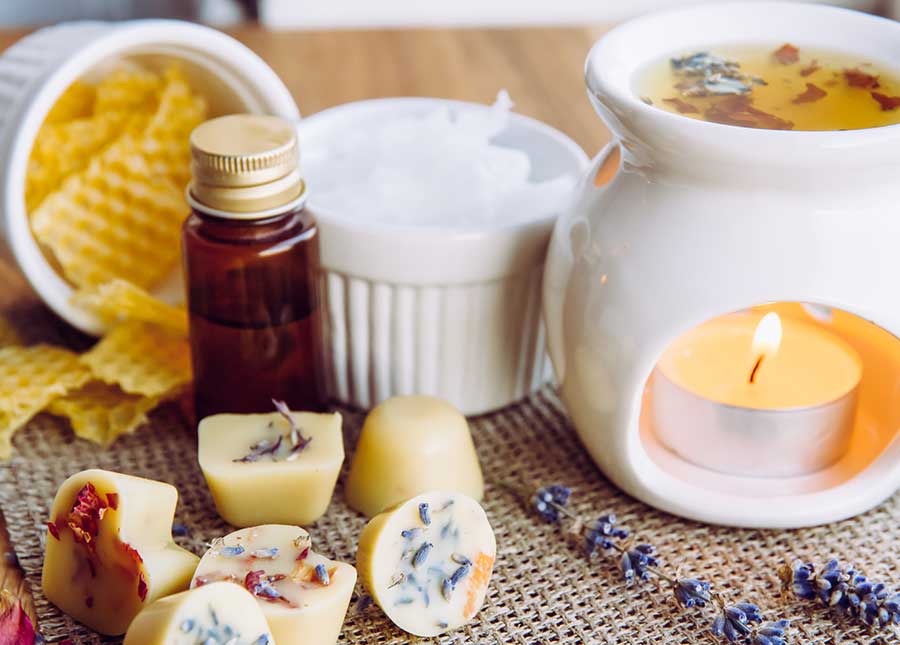 The scent is an incredibly important sense, and it’s one that has a tremendous impact on your home. When looking to make sure that their homes smell gorgeous, these days, people tend to turn to one of two scent-delivering devices: wax warmers or candles. But which is better, and – more importantly – why?

Wax warmers are better than candles because they don’t need a flame to operate, they produce a longer-lasting and superior quality of scent, are safer to use and have in your home, provide you with the option to customize scents, and – in the long run – are better value for money.

Candles have been around for a lot longer than wax warmers, but the latter is fast gaining momentum in terms of popularity. What’s all the fuss about? Why are more people opting for wax warmers? Have candles had their day? All of these questions, and more, are about to be answered, so be sure to keep reading.

9 Reasons Why Wax Warmers Are Better Than Candles

1. Wax Warmers Are Safer Than Candles

The vast majority of wax warmers boast flame-less operation, which means that you needn’t concern yourself with lighters and open flames. This is an obvious advantage for the accident-prone as well as those with inquisitive children, adventurous pets, or diagnosed pyrophobia. Plus, the fear of accidentally burning your home down because you forgot to blow out a candle is eliminated.

Wax warmers are thought to have a much longer burn time than a regular candle. This is because the high heat of a flame causes scents to diffuse into the air faster, which means the scent from a candle doesn’t linger as long. Conversely, wax melts absorb heat at a much slower pace, and thus they release scents at a slower rate, too, which means that the scent sticks around for longer.

When using a wax warmer, you don’t need to worry about blackened glass, crumbs of burnt candle wick, or spilled wax spoiling your scent time. While, of course, the risk of melted wax ending up somewhere it shouldn’t is always going to be present, the wax itself is much more contained in a wax warmer, and therefore the risk of mess is lessened.

4. Wax Warmers Give You More Control Of Your Scent Compared To Candles

With candles, you light them and enjoy the smell they produce. In terms of getting the most scent out of a candle, your only true option is to place the candle in a smaller room, so it has less space to dissipate. Wax warmers can be as strong or as weak as you like – it all depends on the scent of the wax you choose, its intensity, and how much of it you decide to melt in one go.

5. Wax Warmers Are Much More Entertaining Than Candles

One of the best aspects of a wax warmer is that, as mentioned above, you are in control of your scent. What this means is that – on top of choosing how strong or weak you want a scent to be – the opportunity to mix different types of wax to create your own signature scent is presented. You could even make your own wax altogether while making your own candle would be a little more difficult.

Another benefit of using wax warmers is that they’re much more eco-friendly than candles. This is mainly because of the removal of the (sometimes harmful to humans!) toxins that a candle releases into the air when it burns but also because glass jars for candle burning are difficult to recycle. Wax warmers last for years at a time, so you won’t be filling up that landfill.

7. Wax Warmers Cost Less Than Candles (When You Work It Out)

Now, one of the biggest advantages a candle has over its wax melt counterpart is that it costs less to purchase. And this is true – at face value. You see, after the initial cost to purchase the device is out of the way, because wax warmers are designed to waste less wax while producing more scent, it works out cheaper to use them over candles in the long run.

One of the candle’s biggest downfalls is the soot it produces when it’s extinguished. Not only does soot have a strong smell that interferes with the nice scent created by your candle, but it can also negatively impact your home and even your health. When released into the air, soot can cause discoloration on your walls, and it could exacerbate health conditions such as bronchitis or asthma.

Quite frankly, when compared to wax warmers, candles just aren’t convenient. You always need a lighter or box of matches on hand, and they can be troublesome to move once lit, they can easily spill, they can’t be used in certain areas or types of spaces (think offices), and transporting them can be a pain. When you use a wax warmer, you don’t have any of those problems.

Are Candles Better Than Wax Warmers?

Based on the above alone, it’s safe to say that wax warmers are impressive enough to possibly snuff out the candle’s popularity within just a few years. And impressive they are, but that doesn’t mean that the humble candle doesn’t deserve its spot in our homes – and our hearts.

Now you know why, exactly, wax warmers are considered better; let us give the candle the respect it deserves. Though they ultimately don’t win the battle of candle vs. wax warmer, candles have a handful of real advantages over wax warmers.

Candles have been around for a very, very, very, long time. Though wax warmers are steadily rising in popularity, they’re still nowhere near as popular as candles. Because of this, it is much easier to find a scented candle in a store than it is to find a wax warmer.

While you can purchase wax warmers in specialty stores, online, and in the odd grocery shop, you can purchase candles almost anywhere. As long as you use candles, you’ll never have to worry about where to find them as you’re spoilt for choice.

Candles Are Cheaper Than Wax Warmers

Earlier in this article, we mentioned that using a wax warmer is cheaper than using a candle in the long run. However, in the short term, candles are a much more affordable option as matches and lighters are typically inexpensive, and you can purchase candles at every price point ranging from dirt cheap to wildly expensive.

Wax warmers, though cheaper, in the long run, come with an initial running cost that is much more expensive than simply buying a candle and some matches. After the purchase of the wax warmer itself, one must still factor in the cost of the wax melts, candle tarts, or scent chips.

Wax warmers, as has been proven time and time again in this article, trump candles in most areas. However, there is undoubtedly one area in which the wax warmer doesn’t even come close to the candle, and that is in the warmth department.

A lit candle produces warmth, bathes its surroundings in a wash of golden light, and makes your home smell gorgeous. Very few things in this life can compare to the feeling of warmth that is brought about by the glow of a flickering candle – and a wax warmer isn’t one of them.

How Are Wax Warmers Different From Candles?

Candles And Wax Warmers Are Designed And Operated Differently

The main difference between candles and wax warmers is their design and operation. Both have the same purpose: making the space around them smell pleasant, but the way they serve this purpose is quite different.

You likely know that a scented candle consists of a wick (usually made out of braided cotton) that is surrounded by a body of wax. The wick is lit using a lighter, a match, or the flame from another candle. Once the wick is lit, the heat produced begins to melt the wax, and this process releases the scent of the candle. Simple stuff, indeed.

On the other hand, a wax warmer (which is also referred to as a wax melt, candle melt, or candle warmer) is a device in which candle wax is placed. Once the wax is placed in the warmer, it is melted without the help of a flame but rather of an alternative heat source such as a light bulb or battery. As is the case with a candle the scent is released into the surrounding air as the wax melts.

Candles And Wax Warmers Are Totally Different In Appearance

Unsurprisingly, wax warmers and candles look different because, well, they are different! There is truly no mistaking one for the other when you spot it on the shelf or observe it in action.

Whether you’re talking about pillars, votives, cartridges, or tea lights, candles come in a variety of shapes, sizes, and colors. But they’re all instantly recognizable as candles.

While there might not be as many different types of wax warmers as there are candles, there is an assortment of wax warmers available, ranging in style from incandescent bulb wax warmers to a wall-plug wax warmer. But the actual wax used in the warmers looks totally different from the image of candle wax most people have in their heads.

The wax used in a wax warmer varies in appearance according to the brand and the style. In some cases, the wax will be smooth and look almost like a tablet or pill, while in others, the wax will be shaped like a love heart or even a Disney character!

What Do Candles And Wax Warmers Have In Common?

For as many differences that candles and wax warmers have, they do have their fair share in common too. For starters, both of them are fantastic ways to ensure your home smells wonderful without you walking around with your finger pressed down on the trigger of a spray bottle of air freshener!

Further than that, they both make use of candle wax in order to operate and produce the above-mentioned wonderful smells. In addition, they both play a huge role in lending your home a cozy feel and won’t break the bank while doing so. Whether you opt for wax warmer or a candle, either option will have a big impact on your home’s aesthetic, its overall feel, and – obviously – its smell!

Now that you know how candles and wax warmers are different and similar, and what advantages each has over the other, you should have a clear idea of whether wax warmers are better than candles.

In the war of the whiffs, wax warmers will emerge victorious over candles each and every time. Sure, a candle deserves its spot in a drawer in every home (especially those that are located in areas known for blackouts and electrical cuts!), but a wax warmer deserves its spot on the mantelpiece.

Whether you want your space to smell better for longer or want the benefits of a candle without the risk that the open flame aspect brings with it, wax warmers are the better choice for everyone except the most loyal of candle connoisseurs perhaps.

Pieces of wooden furniture are often difficult to discard because they could be antique pieces and hold good memories. Other times, they also hold sentimental value, so it can be quite discomforting...

Cleaning a futon cover is not like cleaning your clothes. It has special considerations that need to be acknowledged. You may wonder if there is a way you can clean your futon cover without bringing...