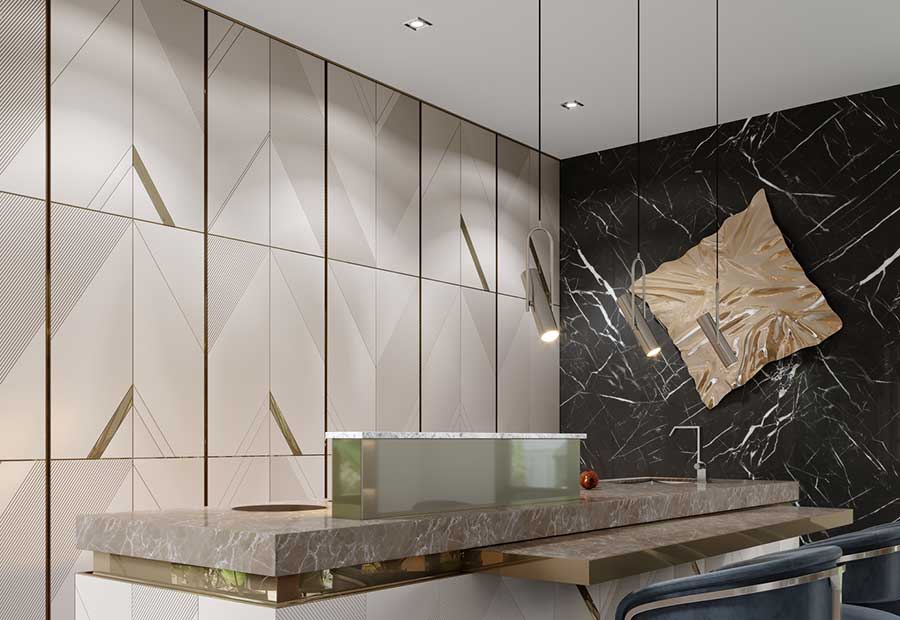 Accent walls are a wonderful way to revitalize your home’s interior, create a sense of architectural interest, draw attention to a space you’d like to highlight, assist in distinguishing one zone from another, and help change the look and feel of a room. Creating an accent wall is a small task that has a huge impact. But can any wall be an accent wall?

Any wall can be an accent wall, but certain walls make for more effective and impactful accent walls than others. These are typically walls with a clear focal point, points of architectural interest, and those that do not have any obstructions, such as doors or windows.

Some interior design rules are made to be broken, while others are in place for a reason. Don’t let trying to figure out the dos and don’ts of accent walls drive you up the wall. Simply read this article and discover all the information you need to make an informed decision.

Can Any Wall Be An Accent Wall?

Once you’ve decided that an accent wall is what your home’s interior design plan has been crying out for, you need to decide which wall will be best. Can any wall be an accent wall, or is one specific wall more suitable than the other?

Begin by asking yourself this question: “Where is my eye naturally drawn to when I enter the room?”.

How To Identify The Focal Point Of A Room

If you’re unsure what your room’s focal point is, all is not lost. Figuring out a room’s focal point doesn’t have to be difficult. If the room has any architectural interest points, simply look around and decide which point is the largest or most striking.

Common points of architectural interest include:

How To Create A Focal Point In A Room

Should Certain Walls Be Avoided For Accent Walls?

Some walls are the perfect canvas for an accent wall, while others simply aren’t. There aren’t any unbreakable rules when it comes to picking the right wall for the job, but you should definitely consider asking yourself the following questions to make your life a little bit easier.

Does The Wall Have Any Obstructions?

If the wall has any obstructions, it’s not easy to turn it into an accent wall. The most common obstruction found on walls is a window. Generally speaking, walls that have windows don’t work well as accent walls for several reasons.

Here are the main reasons why a wall with a window obstructing it won’t make for a great accent wall:

Is The Wall Symmetrical?

Symmetrical walls make for the best accent walls. Walls that are sloped, oddly shaped, or boast a strange configuration generally will not work. While this is a general guideline for most, it will not apply to all.

Walls that aren’t symmetrical are difficult to turn into accent walls simply because their asymmetry isn’t aesthetically pleasing. Most people try to divert attention away from such walls rather than attract more to them. Unless you love your asymmetrical wall and want to make it the star of the show, avoid turning it into an accent wall.

Is The Wall A Standalone Wall Or A Shared Wall?

Making a shared wall the accent wall is also a no-no in the interior design world. A common feature in open-plan spaces, shared walls are exactly that: a wall shared by multiple “zones” of a room, which are usually rooms of their own.

Shared walls don’t work as accent walls because they’re generally too long to be considered effective. Plus, shared accent walls make it difficult to tell where one zone stops and the other starts, which defeats the purpose (not to mention the flow!) of an open plan area.

What Shape Is The Room?

When choosing an accent wall, sometimes you forget about the room it’s going to be in! You must pay close attention to the room’s shape before deciding which wall will be the accent wall.

Of course, in a square room with four identical walls, you don’t have to work too hard at figuring out which one will be right for an accent wall. But in rooms that aren’t square, you may have your work cut out for you.

And, lastly, if you’re attempting to create an accent wall in a round room, well, you’re going to run into some difficulty! Look to the sky for guidance in such rooms – and make the ceiling your faux accent wall instead!

3 Factors To Keep In Mind When Picking An Accent Wall

As is the case with most aspects of interior design, there are numerous factors to keep in mind when deciding which wall to use as your accent wall. Here are three of the most important considerations you must be aware of.

1. Remember The Purpose Of An Accent Wall

When choosing which wall you would like to make an accent wall, it’s imperative that you remember the reason why you want an accent wall in the first place.

Are you looking to draw attention to a specific section of a room? Maybe you’d like to highlight a point of architectural interest. Or are you hoping to use an accent wall as a sort of room divider? Is a bright backdrop for your beloved family photographs all you’re after? Perhaps you simply like the idea of a splash of color and haven’t given much thought to the specifics.

Ultimately, your reason for wanting an accent wall should guide your decision as to which wall is up to the task. Let logic lend you a helping hand here, and you won’t go wrong.

2. Think About The Room

When choosing which wall is going to be the accent wall, the room it’s going to be in is a critical consideration. Time has tested many theories, and it has also proven that certain walls make for the best accent walls in certain types of rooms.

The best wall to make the accent wall in a kitchen is usually the wall behind your primary workstation or stovetop. If one of the walls in your kitchen boasts built-in shelves, this will make for a superb accent wall. Avoid choosing the wall behind your white goods, such as your refrigerator or washing machine, as these will hide the wall.

When choosing an accent wall in your dining room, the wall that is directly opposite the point of entry is usually the best choice as it’s the first wall you see when you enter. Naturally, the table is typically the focal point of the dining room, so it’s always a safe bet to use the wall behind it.

Surprisingly, bathrooms provide plenty of wriggle room when it comes to choosing which wall to make the accent wall. Allow the shape and size of the bathroom, as well as its built-in components such as a basin or bathtub, to determine which wall should be the accent wall. The wall behind the shower or bathtub is a popular choice, as well as the wall behind the porcelain throne.

In bedrooms, the wall that is directly behind the bed is the most appropriate choice for an accent wall. This is simply because the bed is almost always the room’s natural focal point. In addition, bedrooms are mainly used for sleeping, so staring at an attention-grabbing wall as you try to drift off to sleep may not be the best idea.

Lately, many people have found themselves working from home more often than they’re used to, so redecorating the home office is at the top of many a to-do list. Picking an accent wall in a home office is straightforward since these rooms are typically uncluttered. The best accent wall for a home office is the wall that is right behind your desk and work-from-home setup.

Related: Can An Accent Wall Be A Lighter Color?

3. Ask Yourself: “What About The Other Walls?”

Given that this article is all about accent walls, it may seem strange to consider the rest of the walls, but it’s imperative that you do so. A hard and fast rule of accent walls is this: there can only be one accent wall in one room. Having more than one accent wall defeats the goal that an accent wall is supposed to accomplish.

An accent wall should immediately grab the attention of anyone who enters the room. It should not have to fight for attention because of the non-accent walls around it.

And there you have it! The answer to your question of “can any wall be an accent wall?” once and for all. Again, it’s worth mentioning that the guidelines mentioned in today’s article are exactly that: guidelines.

At the end of the day, your house is your home, and you can do whatever you’d like with the walls within it. As long as you don’t have any interior designer friends, that is!

link to Can An Accent Wall Be A Lighter Color?

If you think about an accent wall, it is usually a darker color than the rest of the walls in the room. A dark accent wall does exactly as its name suggests; it accentuates a specific wall as a color...

Continue Reading
link to Do Bookcases Need to Be Fixed to the Wall?

Whether it is for decoration or whether you need a place to store your books and ornaments, a bookcase can be a solid addition to your living area. However, if you are adding a bookcase, you may be...