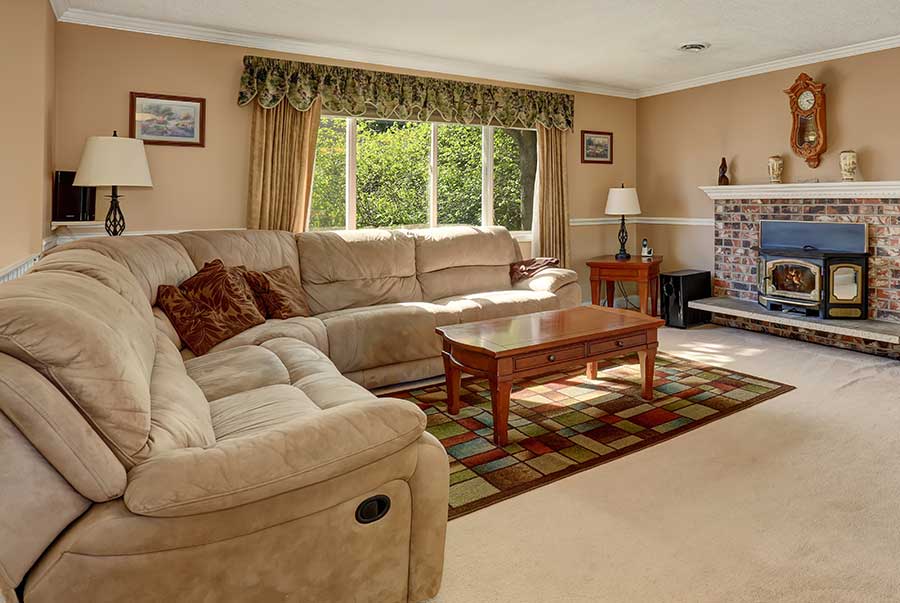 Wall clearance is an important but often ignored aspect of home design. It can be easy to forget that there are many different types of furniture, each requiring varying amounts of space, and if you don’t plan accordingly, your living room might end up looking strange, or walls and furniture can get damaged. One common piece of furniture people often wonder how close they can be to the wall is a recliner.

Recliners should never be placed against a wall, as they are designed to recline backward so the user can lay relatively or entirely flat. This can only be achieved with 4-12 inches of wall clearance behind the recliner, so it has enough room to move backward without contacting the wall. However, the amount of wall clearance depends on the type of recliner.

This article will discuss different types of recliners and how close you can place them to a wall according to that type’s design. Additionally, we’ll discuss where best to place your recliner in any space for maximum comfort, aesthetic, and flow.

How Close Should a Recliner Be to a Wall?

Recliners are often the go-to choice for people who want a big sofa or couch where they can lounge for hours in nearly any upright or laying position they want. The unique design of these pieces of furniture also provides necessary lumbar support to prevent or ease back pain, and the rocking motion in some can help relieve anxiety.

Of course, as with every, there is a give and take here, and what you earn in comfort, you might lose in room space.

As a general rule, you shouldn’t place a recliner directly against a wall, as this will inhibit its reclining functionality and most likely lead to wall or furniture damage. Instead, you should place it at the appropriate distance from the wall based on the type of recliner you have.

There are several different types of recliners, and each has its requirements regarding wall clearance. Knowing how close each can be placed in relation to a wall is an important factor of the decision-making process when looking for a new recliner, as you want to ensure it fits your space.

To help you pick the right recliner for all of your lounging and comfort needs, we’ve listed the most common types you can choose from, along with their wall clearance requirements and unique features.

These are the recliners that started it all and are most likely to be found in any home. The standard lever or pull handle recliner uses the aforementioned tools to release the recliner’s footrest and allow the user to push back on the headrest, allowing the chair to recline backward.

Because these recliners need to recline directly backward, they require the most wall clearance of about 12-inches. As a result, you’re more likely to find these recliners in large spaces with minimal furniture or more towards the center of the room.

After years of missing out on a nice recliner due to lack of space, genius ingenuity gave us the wall hugger recliner. These recliners provide all the features of a standard recliner but take up a fraction of the space.

Wall hugger recliners differ widely in their design because they are actually built on a sliding track mechanism that allows the reclining seat and footrest to move forward as the user reclines backward. As a result, they only need about a third to half the amount of wall clearance (4-6 inches) as a standard recliner.

The greatly reduced reclining distance makes the wall hugger recliner ideal for smaller spaces, rooms with a lot of furniture, or apartments.

One feature the two previously discussed recliners rarely have is the ability to rock, which is why a new type of recliner was made for this exact purpose.

Rocking recliners are the best of both worlds in that you have the soothing motion of a rocking chair combined with the comfort of a recliner. Because of their design, owners have to be conscious of how much wall clearance they need for rocking and reclining in this chair.

As far as their reclining feature goes, most rocking recliners are made similarly to a standard recliner, requiring around a foot of wall clearance.

The challenge of wall clearance increases with the emergence of swivel recliners. These chairs are fantastic for social settings since they allow users to turn and face different parts of the room with ease.

This is possible because these recliners are built on a circular base, allowing them to swivel back and forth and recline. Some swivel recliners can turn 180 degrees, while others allow the full 360 degrees.

How much your swivel chair can turn will strongly affect how close it should be to the wall, especially if you want it to be able to recline in every position. More often than not, you’re going to need about a foot of wall clearance for these recliners, but unlike others on the list, you’ll need this clearance around the entire chair, which means you’re now factoring in furniture replacement in relation to the recliner as well.

Where Should a Recliner Sofa Be Placed?

So far, we’ve focused a lot on different types of recliners and the spaces they’re best suited for, but most of the examples we’ve focused on are where to place reclining chairs in relation to the wall; couches are a different challenge entirely.

Finding the right spot in a room for a reclining couch can be an ordeal considering you have to make sure all reclining parts have enough clearance to recline fully without smashing into the wall or other furniture or blocking off parts of the room.

It is recommended that most reclining sofas have at least four inches of wall clearance, so you can easily place them nearly anywhere in a room. Ideally, reclining sofas should be in front of a long wall that provides a lot of natural light or in the middle of the room where most socialization is centered.

However, if you don’t have a long wall to place your reclining sofa against that allows enough wall and furniture clearance without inhibiting room flow, we suggest going for the classic horseshoe formation layout for your room. This usually entails creating a sort of horseshoe shape with furniture in a section of the room or the center of the room where people will most likely sit and socialize.

More often than not, the formation is built to face a television or an adjoining room. In this instance, the reclining sofa should be placed in front of the opening and accompanied by chairs or other furniture on either side. Oftentimes people will place a decorative rug or coffee table in the center of this formation for more balance and space functionality.

Opting for this layout will allow people to use the reclining sofa to its fullest without feeling cut off from the rest of the room. Still, if you prefer this layout, you’ll need a pretty sizable room, so it doesn’t leave the space outside the formation empty or unusable.

Recliners are one of the best luxuries you can have in a living space, but placing them appropriately in any given room can be difficult, especially when you start considering wall clearance. Generally, most recliners will need between 4-12 inches of wall clearance to function fully, but some wall huggers (also known as zero clearance recliners) can function with less.

Before purchasing any recliner chair or sofa, make sure its size matches your room. For sofas, you can place them against your room’s longest wall or make a functional horseshoe layout, depending on your space and preferences. Reclining chairs can be great corner pieces or placed next to sofas at a 45-degree angle for optimal function and aesthetic.

link to The Top 12 Brands of Recliners

Recliners are an essential part of any home. They provide a place to sit while also giving maximum comfort, ideal for living rooms and bedrooms. Most recliners exist to fit any style in any home. No...

Continue Reading
link to How Long Do Recliner Sofas Last?