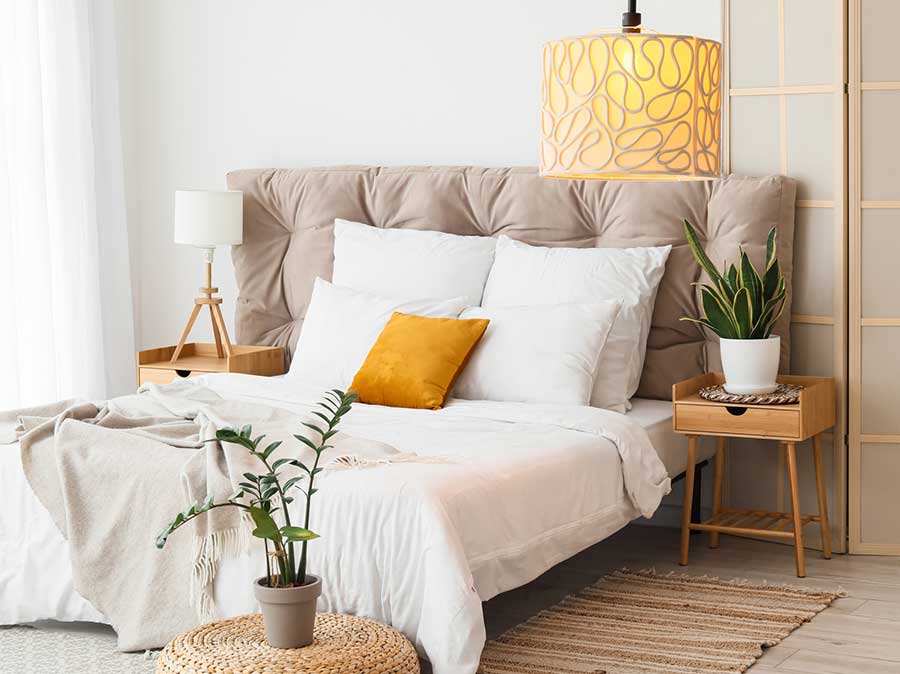 There is so much overlap between different furniture items in contemporary society that it can quickly become confusing as to what is what. Some items may seem identical to the untrained eye while having different names. There are no longer hard and fast rules for furniture, and many furniture items can be used interchangeably in different circumstances.

There is very little difference between a nightstand and an end table. Most importantly, you understand the differences to determine what will work best for your space and serve your needs most appropriately.

Can You Use Side Tables As Nightstands?

Generally speaking, side tables and nightstands can be used interchangeably. While the two furniture items do possess some distinctive differences, there are many similarities in size and function that allow you to choose based on your own needs and preferences.

When choosing a furniture item – such as a nightstand – for your bedroom, you should base your choice on the space itself and the desired style instead of the label imposed on the furniture item by manufacturers.

Consider your storage needs and what you hope to gain from the piece of furniture, and what will serve you best under the circumstances. You may have certain needs and preferences for bedside features, including drawers, shelving, or accommodation for media devices.

If the design is relatively simple and versatile, a side table can easily be used as a nightstand. Both furniture items have similar dimensions. However, it’s important to note that nightstands are slightly higher than side tables/end tables.

In order to determine the right size for you and your space, consider the overall size of the room as well as the available space on either side of the bed.

This means that some end tables may be too low to be used as a nightstand. This will naturally depend on the height of the bed. If the bed is particularly low, then a low side table will function perfectly.

Both nightstands and end tables feature a flat, smooth surface that is designed to host a variety of items. They are both generally situated in order to help add lighting to a room and generally contain at least one drawer for storage.

The Main Differences Between Side Tables & Nightstands

Nightstands are generally found in the bedroom at a location near to the bed. They are used to store items used at night or in the morning, such as clocks, bedside lamps, and clocks.

Side tables, on the other hand, are placed next to sofas or chairs in spaces such as living rooms or family rooms. For this reason, they are slightly lower than nightstands.

Besides their functional purpose, they generally serve a more decorative purpose and often feature an open base or open shelf at the bottom that allows you to store additional décor items. Side tables also often boast a larger surface area when compared to nightstands.

Other Alternatives To Nightstands

Besides side tables, there are countless alternatives to traditional nightstands that will serve the purpose just as well. In this instance, you are limited only by your imagination and your willingness to try something slightly out of the ordinary.

If you don’t have the budget to purchase a nightstand (or an end table to use as a nightstand), then you can make use of several other items, some of which can be found lying around the house.

One of the simplest nightstand options is to use a dining chair. Provided the chair has a flat surface, it can easily serve as a nightstand. By using a chair with some character as your nightstand, you will lend an air of casual style to the bedroom.

In a bedroom with two single/twin beds, a console table will work extremely well as a nightstand for both beds. This is a better alternative to having two separate nightstands.

An old bar cart is an equally good alternative to a traditional nightstand. Bar carts generally have plenty of storage space, are designed at the right height, and usually possess a good amount of character to make for an appealing nightstand.

If budgetary constraints are preventing you from buying any new furniture items, a simple pile of books can make a perfectly functional nightstand. This presents the opportunity to create an extremely creative nightstand by using books with interesting designs.

A floating shelf also makes for a good nightstand. This is especially useful in settings where space is limited. In some cases where a bedroom doesn’t have sufficient space for a nightstand, the windowsill can also serve as a nightstand. The success of this will depend on the placement of the bed.

Some other alternatives worth considering as a nightstand include a built-in niche, an ottoman, a stack of vintage suitcases, or a coffee table. A few more good options include using a desk, an artists’ pedestal, a step stool, a dresser, and a barstool.

Related: Nightstand vs. End Table: Do You Know the Difference?

Because side tables and nightstands are very similar in terms of dimensions and features, the two furniture items are generally considered interchangeable. In order to find the ultimate nightstand for your space, consider your needs and how you plan to use your nightstand. Consider storage, surface size, and the height of the bed in relation to the nightstand.

link to Can A Nightstand Be Higher Than A Bed?

When it comes to bedroom décor, most people probably want furniture that shows off their personal style and is both comfortable and easy to use. This leaves many hoping to find the perfect bed setup...

Continue Reading
link to Nightstand vs. End Table: Do You Know the Difference?