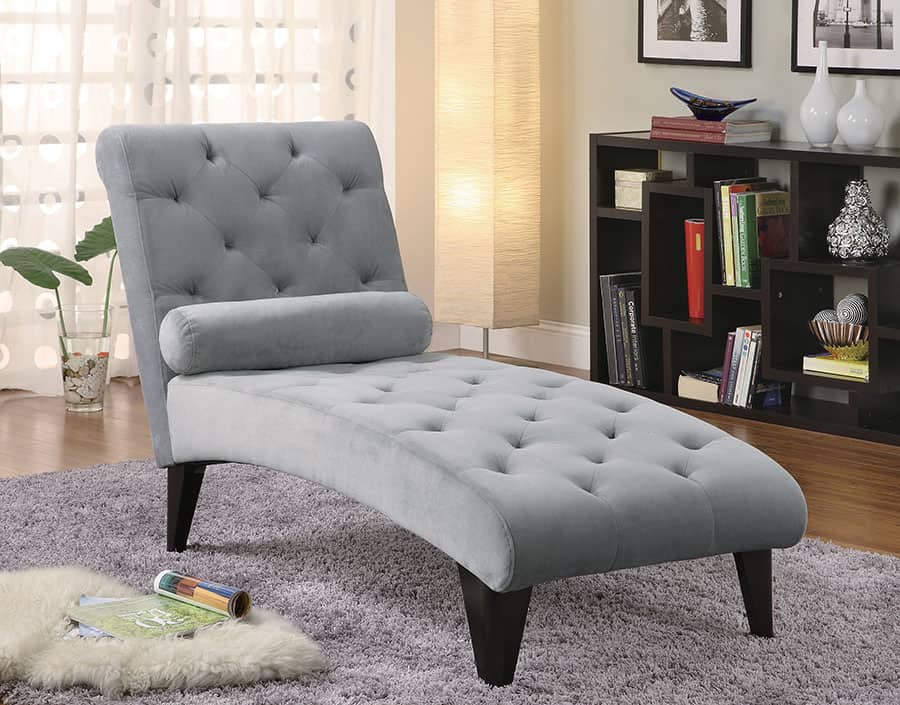 Fainting couches and chaise lounges are similar, but not the same. A fainting couch is a chair with arms that reclines, while a chaise lounge has no armrests and does not recline. Fainting couches were used in Victorian times to help ladies faint into if they felt lightheaded or were overcome by something, but now they are mainly decorative pieces for formal living rooms or bedrooms.

If you are interested in these two pieces of furniture, you’ll be interested to know the subtle ways in which they are different. In this post, we’ll talk about chaise lounges and fainting couches, their history, and their uses.

What Is the Difference Between a Chaise Lounge and Fainting Couch?

There is one very basic difference between these two often-confused pieces of furniture:

Aside from their basic differences, there are other ways in which chaise lounges and fainting couches differ, both in their appearance and their use.

A chaise lounge is designed to provide a place for someone to sit or lie down that is comfortable but not necessarily as supportive as couch furniture because of the absence of armrests. It can be more conducive to mixing activities like reading books while relaxing because there are no arms with which they could bump into while reclining back or napping.

A fainting couch, on the other hand, is designed to provide a place for someone to sit or lie down that is comfortable and supportive because of the presence of armrests. It is also better for reading books because it has the support of armrests.

A chaise lounge is a chair or sofa with no armrests. It has a long seat without back support, and it typically features an angled headboard that can be used to rest one’s head against while reclining backward. Longer models of these are sometimes called a “daybed.”

A fainting couch is similar in appearance to the chaise lounge but often displays more decoration on its frame, such as carvings, metal legs, etc., because it was historically found in wealthy homes during the Victorian era.

The underside of this furniture piece usually also includes storage space for blankets or other bedding items. A typical example would have four straight wooden legs topped by a leather or fabric seat.

Why Do People Confuse Chaise Lounges and Fainting Couches?

The fainting couch is often confused with the chaise lounge because of the similarities that draw them together: both are long, reclining chairs that can be used as a bed or place to relax. However, there are some key characteristics of each piece of furniture that can help you spot the difference.

The design for both couches has changed over time, but a fainting couch typically features more elaborate decoration on the frame and storage space underneath than today’s modern-day chaise lounges.

Armrests and Back Support

Modern-day fainting couches also include armrests and back support to provide comfort while seated. Chaises do not have either one of those features, which make them very different from traditional Victorian era fainting couches in terms of function and appearance.

Fainting couches are no longer produced commercially because they were replaced by more modern furniture.

The desire for these pieces of furniture comes from the Victorian era, and collectors will pay high prices to own this type of couch today. The antique market is a good place to find an authentic fainting couch, but many people prefer purchasing vintage-inspired chaise lounges that provide similar features as those found in a traditional fainting couch without breaking the bank.

In fact, some contemporary designers like Ty Pennington have used the design elements of a Victoriana era fainting couch on their modern-day designs for retro-chic living spaces.”

While it is difficult to find a fainting couch in stores, they are still available through furniture dealers and retail websites. It can take some time for the right one to be found, but with patience comes reward as these couches often have more complex designs that make them worth the investment.

The purchase of a special, vintage piece is not just about paying for function but also about investing in style by owning something unique that brings joy!

Why Did Anyone Need a Fainting Couch?

A fainting couch is a piece of furniture that was developed for use in the 19th century. It’s historically referred to as a “chaise longue” or simply “long chair,” but it is named for its unique function: a place for the lady of the house to rest. The need to rest has been explained in several ways:

While some of these uses are theorized and disputed, there is one thing that is for sure: it was a very popular piece of furniture in the Victorian Era.

The earliest documented instances of this design can be found in paintings by artists such as Anne-Louis Girodet and Jean Auguste Dominique Ingres, although many people attributed the invention of the chaise longue to Empress Josephine when she wanted an alternative form of seating that would accommodate her growing size during pregnancy.

Fainting couches were typically placed near windows so one could look out at their garden while resting after the exertion required for entertaining visitors all day. Today, these pieces are prized among collectors who appreciate them as a symbol of elegant living during this time period.

What Are Chaise Lounges Used for Today?

Chaise lounges are the perfect piece of furniture for just about any room in your home. You can use them as extra seating, a spot to relax while reading or watching TV, an alternative way to entertain guests in your living room, and more!

Most chaise lounges today have a wooden frame and are upholstered. Some are simple fabrics, like linen or cotton, and others are more luxuriously covered in leather, velvet or fur.

Chaise lounges have become more popular over recent decades due to their versatility and comfortability. They’re perfect for reading nooks, sunbathing on your porch, or relaxing outside with friends under starry skies.

The Popularity of Outdoor Chaise Lounges

They are usually made of wicker, rattan, or wood. Some chaise lounges come with a cushion that is filled with foam and upholstered in fabric while others may not have any extra padding at all. The type you choose will depend on your decorating style as well as how much use the furniture gets.

Outdoor chaise lounges allow for a person to lie down and recline on their back or stomach, making them the perfect fit for people who want to read outside or just relax in the sun.

Fainting couches were popular in the Victorian era when they functioned as furniture that could be used for lounging and sitting. However, today these pieces of antique furniture are difficult to find outside a museum because there is no modern need for them, aside from some furniture lovers who prize them as decor.

Chaise lounges, on the other hand, have been growing in popularity ever since they first emerged at international design shows in the 1970s. Today you can find chaise lounge chairs both indoors and out.

While they do share some similarities, they are different in both their design, use, and history.

link to Daybed or Chaise Lounge: Which Is Better?

When it comes to outfitting your own living space, furniture is a vital piece that you need for both function and fashion; any great living area can be made or ruined by a piece of furniture. Daybeds...

Continue Reading
link to Can an Ottoman be Used as a Table or a Chair?

If you’re still looking for that perfect finishing touch, an ottoman may be the answer! An ottoman is a perfect addition to your space and can be both functional and aesthetically pleasing....