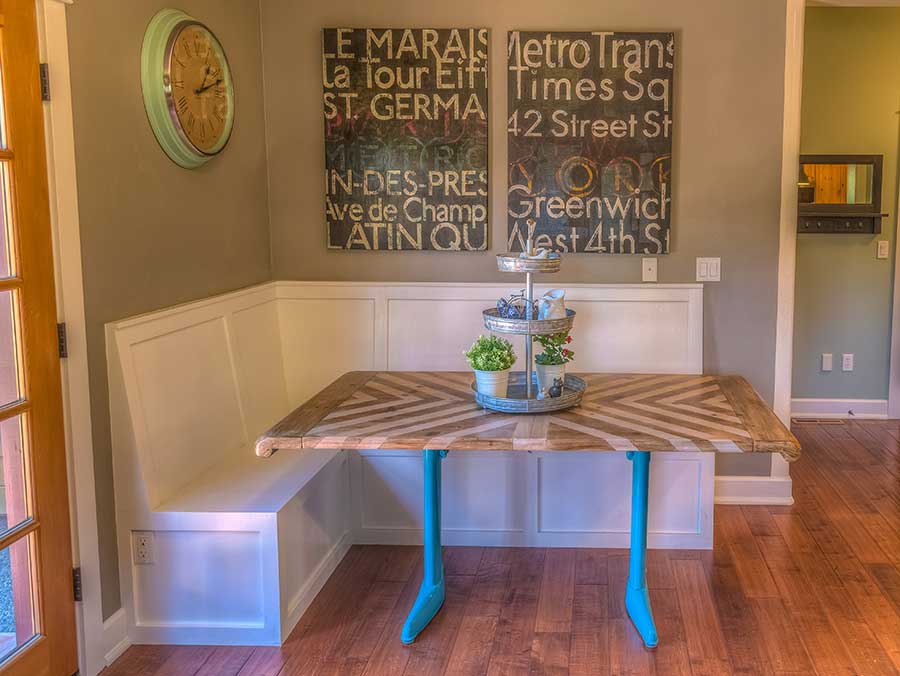 Cozy conversations and tasty family meals describe memories of sitting in a breakfast nook in a kitchen corner. The nook is synonymous with a quick cereal and milk breakfast or a bite of food before dashing off to work. But does a breakfast nook have to be in a corner?

Breakfast nooks don’t have to be in corners despite these built-in seats and tables being there for nearly a century. In the 50s, the corner breakfast nook was a standard kitchen feature. Today’s work-live-play kitchen designs challenge the conventional kitchen nook concept.

Lifestyles influence kitchen designs like that of the popular (and cozy) alcove or corner breakfast seating in the kitchen. For decades this option was synonymous with quick breakfasts or meals with family or friends. Designers now criticize the happy family times setting as happening in an afterthought space. There are corner-less dining options.

One can’t ignore the early history of the eating nook in America’s small bungalow-type houses in the 1920s and its continued popularity. The built-in table, benches, and loose chairs matched the size of these small houses. The labor- and time-saving aspects and the ease and convenience of these small eating spaces were also attractive to larger homes.

However, a definite no is whether a breakfast nook has to be in a corner! It does not. The mood set for decades of the stereotype of the happy family – father, mother, and children – seated in a breakfast nook no longer holds. As our lifestyles change, the corner breakfast nook is in balance. This space needs rethinking and a revamp.

This area is known by other names too, like the dinette or salle a manger, but mostly is thought of as a cozy corner or even small, safe seating area in the kitchen, against a wall, or in an alcove.

Many contemporary designers ditch the idea of a breakfast nook in the first place and decision to put this kind of seating and eating arrangement in a kitchen corner. Designers opt for a contemporary work-live-play design (see below) as a less formal option. But not, as some argue, a nook in a space that appears as banished into a corner.

But first, deciding to have a breakfast nook in a corner can’t just be written off. A kitchen’s size and layout determine a space for less formal eating. Also, the functions performed in a kitchen are important, and breakfast or any other meal should not interrupt the flow in the kitchen. Nor should eating a meal in the kitchen be shoved into a space in a corner.

The Traditional Breakfast Nook In The Corner Relooked

Breakfast nooks were designed for small houses, and this quaint and even practical idea filtered into larger houses. The idea caught on and lasted for decades as a convenient and easy space in the kitchen for cozy meals with family and friends. The space chosen was always in a corner, in front of a window at times, and mostly against a wall.

What’s realized now is that these ‘nooks’ don’t have to be in corners or against a wall. Eating in the kitchen can be part of the general flow of a kitchen. Designers show how these kitchen eating areas can link to the rest of the house, home (apartment), or outside. The first move is to drop the word ‘nook’ for a free-floating arrangement or a less formal kitchen dining space.

Kitchens are traditionally used to prepare food and cook and now also a less formal area to sit down with family and friends for a meal. It’s also a space for a busy household member to sit, read or page through a book and wind down with a cup of tea or coffee while getting on with meal preparations too (see multifunctional space below).

As traditionally used, the nook in the corner, sometimes in a less airy and even darker corner, has been taken out of there. If this is not possible, the space is relooked by taking out the fixed benches and tabletop and replacing these with a round table and chairs with more access to the kitchen.

Having the breakfast nook outside the main activities in a small kitchen benefits the flow of prepping and cooking. The position doesn’t have to be a corner, though, or darker than the rest of space or against a wall. The space needs to have equal access to the rest of the house (or apartment) and even to the outside, and a view.

The first approach is to reorganize a corner and remove fixed benches and the fixed table. Start with freeing up the corner for different use. The best choice is a round table with individual chairs there. The emphasis is to have this space as part of the kitchen and relating to the rest of the house. Not a breakfast nook as just a space in a corner.

What’s possible depends on the size of a kitchen, its floor space and plan, what’s already there, and the kitchen’s layout. The choice to have a free-floating eating arrangement (with moveable table and chairs) in the kitchen is an option that discredits the need for a breakfast nook in a corner. It’s even thought that putting the nook in a corner is wasteful.

The working kitchen is a multifunctional space and considers how we live. With much change, technologically and other, even the kitchen is re-planned and thought and definitely without a breakfast nook stuck in a corner!

The room’s orientation, view, and light (sunlight) matter. For the mid20th c modernist architect Frank Lloyd Wright a kitchen as a living and dining area was already possible when he worked as an architect in the mid20th c. There’s been a resurgence of designs with the table in the center of the kitchen and most activities moving to the kitchen.

Getting breakfast done before school or work, helping with afternoon school work, and even prepping for a busy next day’s work while cooking is daunting for even the most experienced multitasker. But getting a kitchen working as a functional space is a step in the right direction. However, it doesn’t mean the kitchen can’t be a multifunctional space.

The breakfast nook for decades implied a simpler way of eating in the kitchen, an informal one, but this need not happen in a corner. Revamping the kitchen by moving the breakfast nook out of its corner makes it possible for kids to do schoolwork under the watchful eyes of cooking meals. And friends like the ambiance of a meal prepared too.

The idea of corner-less dining space in a kitchen is catchy, and there’s plenty of inspiration on internet sites on how eat-in kitchens offer style and are practical. These don’t have to mean a breakfast nook in a corner. Nor that the space is so cramped that that’s the only space to eat in (like estate agent jargon EIK – eat-in kitchen).

Where you eat is important, and that goes for designing a space. It needs to be comfortable and part of the room, the kitchen. It’s not just the color and light that matters, but the placement of furniture and specifically where you eat. The kitchen is where you nourish yourself and your overall well-being and where you choose to eat matters.

In feng shui, the kitchen stands in for your aspirations too, how well you do in everyday life. The kitchen is the place in the home you use to nourish yourself and your family – a basis for success and prosperity. So it’s hard to think that for decades we’ve been putting a breakfast nook in a corner, in an almost out-of-the-kitchen space.

Related: 11 Benefits of Having a Breakfast Nook

The breakfast nook in the corner has been rethought and removed, but the family and friends in the kitchen stay. It appears that the kitchen and its contemporary uses and adaptations might even swallow up the living room!

With our rushed lives and little time, doubling up on food preparation and family or friend time in a multifunctional kitchen is needed. Though having a breakfast nook in a corner is a choice but no longer the only one. There are merits in an open plan living and dining space in the kitchen.

link to 11 Benefits of Having a Breakfast Nook

Having a home and personalizing it can be both a fun and daunting task. You might think that when you have a new home or are remodeling the one you have, most of your focus should be on the living...

Continue Reading
link to Is a Round or Rectangle Dining Table Right for Me?

Dining room tables are the social hotspots of any home, so the shape is key. But which is best for your home, rectangle or round? The dining room table is often where friends and family gather for...