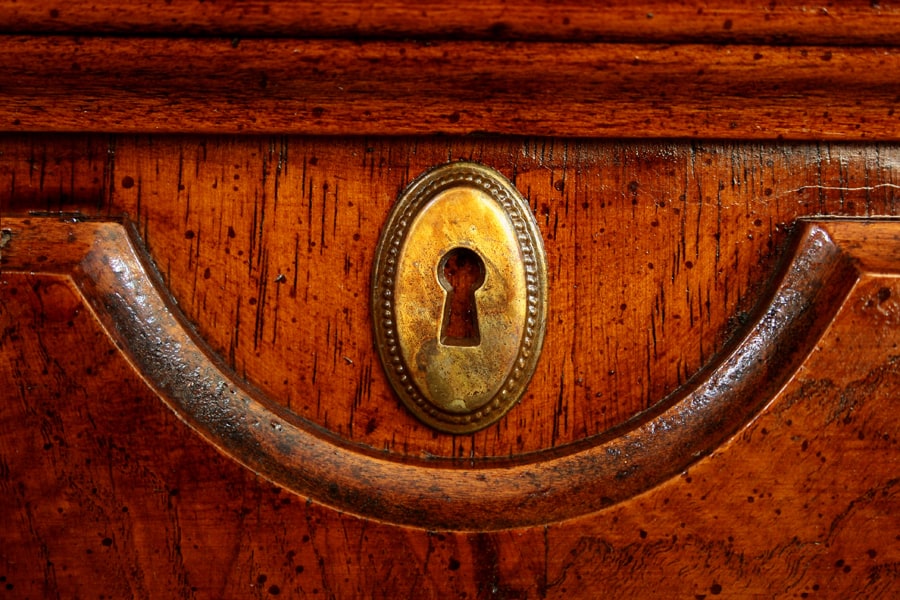 If you’ve ever been shopping for a vintage dresser, whether online or a local antiques store, you may have found a few options that have a unique feature most modern dressers do not have anymore: locks.

Why do old dressers have locks? Old dressers have locks because historically, people wanted to protect their stored belongings from employed house servants or anyone else that could intrude their privacy. Essentially, dressers were designed with locks to keep the owner’s property safe.

Dressers are still common pieces of furniture today, but very few still have the locks often found in older models. The remainder of this article will discuss the history behind locks on dressers, and what to expect should you decide to purchase one of these vintage pieces.

Why Were Locks on Dressers Necessary?

To provide a little more context as to why there were locks on something as trivial as a dresser, we need to take a brief look at how things were about a century ago (we’re talking late 1800s to early 1900s).

Back then, there was a large economic gap between the rich and the poor. It was also very common for upper-class families to employ maids and servants that came from lower-class households. In many cases, the family would eventually build trust with the help as they continued to serve them. However, this wasn’t always the case.

For untrusting families, one of their biggest fears was that while they were away, the maid or servant would have the opportunity to steal something valuable. Additionally, they would be able to grant access to someone outside of the family to come into the home and potentially steal belongings.

There was no point in locking the front door on the way out since the maid or servant was already inside, taking care of the house. So, the next logical step was to lock up the items that they didn’t want to be stolen.

Enter locked dressers. A lock on a dresser managed to create a real sense of privacy and security for the owner, even if the objective was to keep people from within their own household away from their personal belongings. It perhaps also provided an extra layer of security in the event of a home invasion.

To create a better picture, let’s look at the mechanism behind these locks.

Nowadays, we can enjoy a wide variety of locking mechanisms, ranging from simple keyholes to cybernetic, fingerprint-detecting locks. However, conventional dressers had a very specific system on their drawers, and this was called a deadbolt system.

A deadbolt system consists of a bolt that slides back and forth across the locking mechanism and goes into a small hole on in the dresser called a mortise cut. The purpose of this is that when the lock mechanism is engaged, the bolt is essentially stuck inside the mortise cut, thus holding the drawer in place, and making it unable to move.

The second trial that the key must go through is to have the right shape. Inside the lock, there are many different pins that are supported by a spring. These pins have different lengths and must be pressed against the springs, to align in such a way that allows for the locking mechanism to rotate and be engaged or disengaged.

This is why a key is so special to a lock. The key has to match its respective lock in just about every single aspect. Ideally, you would have been sold the old dresser with its key. However, if you do not have the key and are left with a dresser that can’t open, then don’t worry. There are other ways of opening an old dresser.

What If I Don’t Have the Key?

Purchasing an old dresser that doesn’t even come with its key can be frustrating, especially if you discover this after the fact. Sure, you can open it up via forced entry by cutting away parts of the wood, but this quickly results in ruined furniture, and no one wants a valuable, vintage piece of furniture to become damaged.

Luckily, there are non-destructive methods to open an old lock on a dresser.

For one, it is very possible to find a key that matches the lock. Antique locks tend to have simpler mechanisms than modern locks of the same type, so you just need a key that’s big enough, long enough, and has the right blade to lift the pins and turn the mechanism. However, there is one obstacle you might have to face:

Breaking into a lock is certainly not a new concept; people have been doing it since locks were first invented, and lock makers were not willing to let their locks be easily fooled. As a result, there are some mechanisms in place.

There is another factor that could get in your way, which is not something put in place by the lock or dresser manufacturer. In fact, it is quite the contrary: some of the lock mechanisms could be broken with time and age. This usually is a problem with dressers that are already unlocked but are unable to lock again.

But don’t worry, it is usually less of a huge deal than it sounds. You can fix the lock yourself with some glue and a screwdriver or have a lock expert do it for you.

Why Aren’t Locks on Modern Dressers?

Manufacturers haven’t necessarily stopped using locks on dressers; it’s just that people have stopped keeping valuables in them! Today, we have items such as safes and lockboxes to keep important items safe, while we reserve dressers for things like clothes and other textiles. In addition, it’s much more convenient to lock the home to protect everything inside rather than have one special lock for a piece of furniture.

You may find some modern dressers with locks, but they are usually more for aesthetics than function.

However, you’ll still find modern drawers at least with locks as an added feature, especially in households with young children to keep them from playing with anything dangerous like scissors or knives.

In conclusion, times change, and so does furniture. If what you are looking for is a piece of furniture to store your valuables safely, then you can find much better modern locks for drawers that do a better job than a deadbolt lock from a century ago. However, if we are talking about style, then nothing can beat the classics.

link to Nightstand vs. End Table: Do You Know the Difference?

Continue Reading
link to Why Do Bedroom Sets Only Come with One Nightstand?

If you're going shopping for a new bedroom set, you might hit a snag, as most bedroom sets only come with a single nightstand. This leaves you in a predicament -- shell out money for another...