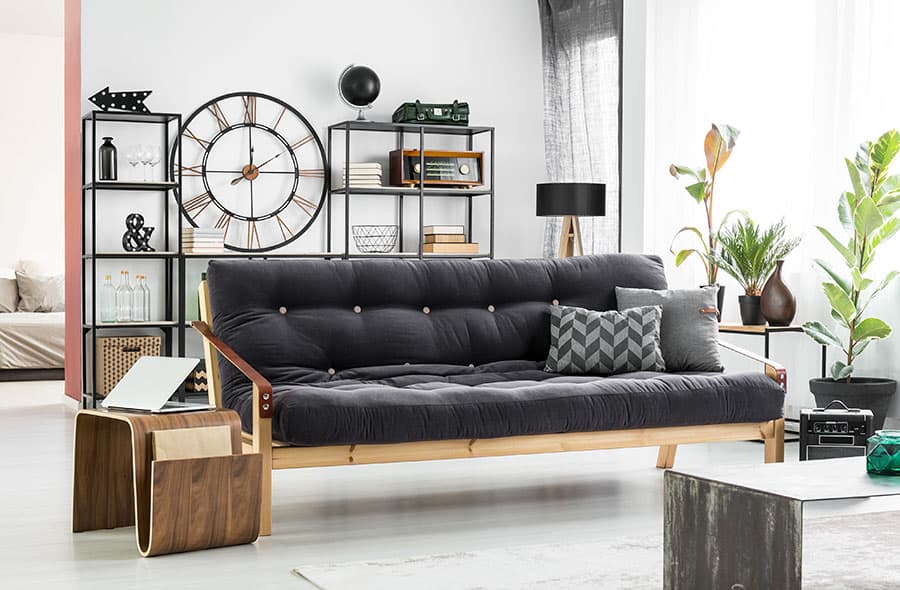 Futons are now a common staple of apartments and homes across the world. What was once relegated to dorm rooms is now commonplace. Since more and more people are using them, it is important to understand how to maintain a futon, especially if it sags.

Any mattress will sag over time. Futons are no different. Over time, you will find your futon sagging, but you do not need to get a new futon–at least not yet. Read on to discover how to fix a sagging futon in 7 steps.

1. Add Support to Your Futon

If you notice that your futon is sagging, you need to take action now. The longer you wait the more difficult it will be to fix later on. If you wait too long, you will need to get a new futon altogether. You may need to add support to your futon in the form of a hard surface, such as plywood. More on that later.

Why does your futon sag without support? There are a few reasons, which include:

Now, back to adding support to your futon. If you have found your futon beginning to sag, your first step should be to add some support beneath your futon.

How to Add Support to Your Futon

Adding plywood support to your futon is a great way to fix a sagging futon. It will help distribute the weight better, and it will create a new firmness to the futon that will help in the long run.

Another option to add support to your futon is to use mattress cushion supports.

Mattress cushion supports are essentially thin support mats built specifically for a futon. They work in a similar way to the plywood method, and they will fit within the frame, too.

These can be bought easily, and they are manufactured specifically for futons, so it takes a bit of the uncertainty and out of the equation.

2. Flip the Mattress of the Futon to Fix Sagging

The next step to look at when fixing a sagging futon is to flip the mattress. Over time, the fibers within the futon’s mattress will begin to compress from repeated use. The result is a sagging futon.

First, you need to look at the two common types of futon mattress:

When you have the mattress, you will notice it begin to sag over time. You can easily remedy the situation by flipping or rotating the mattress.

How to Flip the Mattress of Your Futon

Flipping your mattress is a very simple way of alleviating the sagging of your futon. You take the mattress off the frame and then turn it over.

You can either turn it over the long way or the short way. It is important to do this consistently throughout the year.

If you flip your mattress occasionally you will prolong its longevity. Additionally, you are moving those sagging areas to the bottom of the mattress. The weight from sleeping and sitting on the upper side of the futon will help even out the sagging areas.

This is why it is important to do this consistently. You do not want the new topside to start sagging, either.

Rotating the Mattress of Your Futon

Flipping your futon’s mattress is much more effective than just rotating your mattress. Rotating the mattress does not change which side is sagging, it just moves it to one end or the other.

3. Air Out the Futon’s Mattress

The next step for fixing a sagging futon is a relatively simple one, too.

How can you tell if you have minor sagging in your futon? Many people think that it will be very noticeable: it will be clearly dented downward in the center. However, this is not always the case. When it comes to minor cases of sagging, it may not be visibly obvious that there is a sagging issue.

You may have minor sagging issues if you experience some of the following:

Airing the mattress out can help with minor sagging of your futon, and when you fix a sagging futon you will eliminate the above-mentioned issues.

How to Air Out a Futon Mattress

Airing out a mattress allows the inner fibers of the mattress to rest. When you are constantly using your futon, it wears down these fibers. They need a chance to recuperate.

The longer the mattress can air out the better. The extra time will let the fibers of the stuffing regain some of their strength. You will see the results when you replace the aired-out mattress to the frame. You should see a noticeable difference from when you first took it off the frame.

Futons are versatile in their functionality. They are not just beds. They are also couches. They can change styles simply by changing their coverings. When a futon sags, it can put a damper on the usefulness of the futon.

To restuff your mattress you will need some supplies to get started:

There are two ways to restuff a futon mattress. One is simpler than the other, but both work well.

Restuffing your futon’s mattress is not hard, but it does take some work and a little patience.

There are two methods. The first directly cuts into the mattress to add the new cushion foam. The second method does not damage the mattress directly. You can decide which method is best for your purposes. You need to consider how bad the sagging is.

Method One: Directly Stuffing the Mattress

For this method, you will need scissors (or another cutting instrument), the new cushion foam, and staples (or needs and thread).

Follow these steps to restuff the futon using this method. Note: check your mattress before cutting into it. It may have a zipper. You do not want to cut into the mattress unless you have to.

If you prefer not to cut into the mattress itself, you can always use method two.

This second method does not damage the mattress. Instead, it focuses on wrapping the mattress with the new cushion foam.

For this method, you will need measuring tape, duct tape, a trash bag (or bags), and the new cushion foam. Follow these steps to restuff the futon with this method:

5. Refold the Futon to Fix Sagging

Whether you use a traditional Japanese futon that does not have a frame, or you use an American-style futon that looks like a couch, you are going to fold it.

Folding the futon is how it is stored and how it is placed on certain “chair-like” frames. The way the futon is folded, however, can affect how it sags.

Oftentimes, people continuously fold it in the same way throughout the lifespan of the futon. This should not be done. Folding in the same place in the same direction can have negative impacts on the mattress:

Why It Is Important to Refold a Futon

Refolding a futon is simple. You fold it in the reverse direction from time to time. This will keep the inside of the mattress in a good condition. But why should you refold it? It seems like such a simple step to take to fix the sagging of a futon, but it is an important one.

Daily maintenance is one of the most important aspects of preventing a futon from sagging. It is never too late to start daily maintenance, either. Even if you see that your futon is beginning to sag, implementing consistent maintenance will fix your sagging issues and will help prevent it from happening again in the future.

Refolding a futon is one of the steps to fixing a sagging futon, but it, paired with other steps, is vital in restoring the benefits of a futon to your life. Consider these benefits you will regain once you have fixed your sagging futon:

6. Wrap the Bars of the Futon Frame

A sagging futon is not always the result of the mattress. It can also be because of the frame itself. You may find that the bars and springs underneath the mattress are the cause of the sagging.

A futon frame sags for the same reasons as a futon mattress. Over time, the weight can wear out the bars and components of the frame and cause it to sag. Wrapping the bars of the futon frame can help mitigate this sagging.

It is important to consider what type of frame you have. There are several types of futon frames to choose from. Some of them include:

Regardless of which frame you have, you need to take a look under the mattress to see if the frame is to blame for the sagging of your futon.

How to Wrap the Bars of a Futon Frame

Wrapping the bars of the futon frame beneath the mattress is a great way to fix a sagging futon.

The wrapped bars will provide extra support to the mattress above it. Support is a recurring theme when it comes to fixing a sagging futon. It is very important. Follow these steps to wrap the bars of a futon frame:

The mattress will hide the duct tape you have used, so no one will see it. In the end, it will provide additional support to your sagging futon, which will help it stay firm and comfortable.

Sometimes the issue came with the mattress. When you are buying your mattress you need to be diligent to avoid these pitfalls.

Futons can come with warranties. If you just bought your futon and it is sagging, you need to check your warranty. Your issue may be covered by the warranty and you can replace the futon at no extra cost to you. After all, it was not your fault that the mattress began to sag so soon.

But what should you look for when getting a futon to avoid having to use your warranty and, also, to avoid sagging? Consider these elements:

Fixing a sagging futon does not have to be difficult. In fact, it can be quite easy. If you follow certain steps you can avoid having to use a warranty and can also prevent future sagging incidents.

Futon mattresses are the ultimate multi-tasker of home furniture, functioning as a sofa by day and bed at night.  Whether it serves as your guest bed or your bed, futons are not just a college...

Continue Reading
link to Futon Sinks in the Middle? Here’s What to Do

Futons were once a staple of college dorms, back when they were a simple frame and mattress. Most futons came with a metal frame and a solid-colored cushion. Fast forward to today, when futons have...