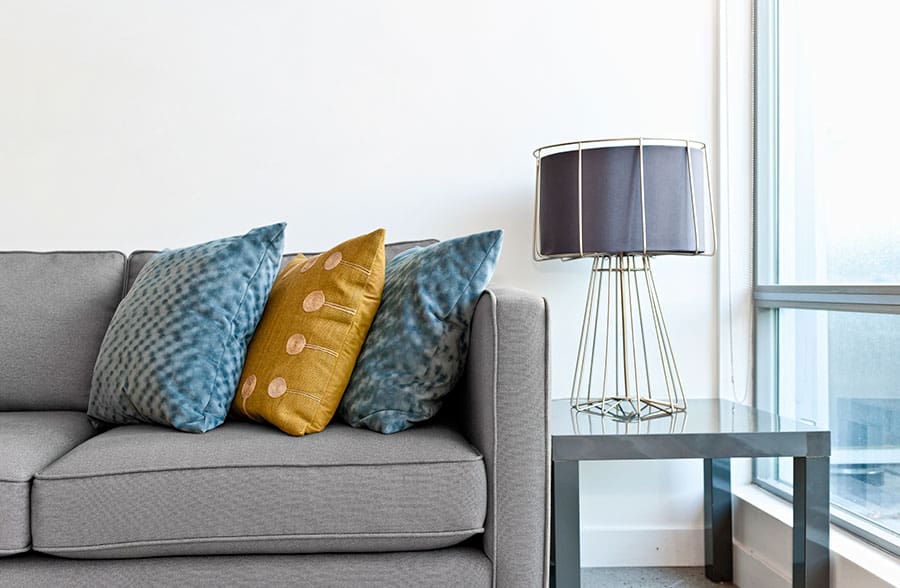 Trying to decide between a nightstand and an end table when caught up in the excitement of decorating a room can be tricky. At first glance, the two might seem like identical furniture pieces. It is hard to live down your mom’s embarrassment noticing that you have used the wrong type of furniture during a weekly Zoom call. But how can you tell them apart?

Although it is nearly impossible to tell just at a glance, nightstands are typically found on one side of a bed and used for nighttime storage. End tables are often used next to a couch or chair convenient for beverages and remote controls.

There are not many differences between nightstands and end tables outside of their location within the house. Despite that, this article delves into their respective histories, trends, average prices, and essential differences.

It is easy to understand the confusion in telling nightstands and end tables apart in the store. Both have smooth surfaces and are made to be receptacles for object storage. In the bedroom, it may be glasses or earplugs. In the living room, a stack of magazines, family photos, or coasters.

Roughly the same size and shape, in many respects, they are virtually interchangeable. In theory, you could use one in place of the other, but some key differences lead to the furniture pieces being uniquely suited for their respective functions.

Nightstands are used for storage, conveniently within arm’s reach from the bed. Often, nightstands have two deep drawers to store the most needed items nearest the bed, such as medication or contact lens solution. The articles are close but out of sight. With low shelving and doors to shut, messy cords and nighttime moisturizers can be hidden away to eliminate clutter.

On the other hand, end tables tend to be more decorative and part of a room’s aesthetic. The surface of an end table is often the only functional feature. Instead of storage under the top, the base of an end table may be artistic and open. Some end tables feature a single shelf near the bottom for further decoration, like coffee table books.

Nightstands and end tables cost roughly the same price and fall into a similar price range, depending on where you shop. You can probably find an affordable table at an antique store or splurge on an expensive table at a high-end design shop. Regardless of what you’re looking for, you can probably find just about any kind of design or shape.

Nightstands are every bed’s best friend. They have been evolving with the times. Customers eagerly await the time when nightstands will become the hub of the bedroom, with capabilities for changing the TV’s channel, turning the lights on and off, and setting the thermostat, all without getting up.

Many manufacturers have started adding fun and useful features like:

For some bedrooms, like dorms, a traditional nightstand is impractical for the limited space. Floating or hanging nightstands are becoming increasingly popular in dorms and for people with loft beds. A floating nightstand is made of several different materials but is hinged on an arm that can be retracted and flush with the wall.

Hanging nightstands attach to the side of the bed frame or headboard and can be easily removed when no one is in bed, which creates more space in the room. They are not just glorified TV trays either; they also have USB ports and small reading lights in most models.

One of the most notable trends in end tables is using nightstands in their place. More and more often, people are trading the single use of an end table’s flat surface for a multi-functional nightstand. The storage offered by a nightstand is appealing in the living room because it provides a great place to store:

While decorative nightstands are plentiful on the market, end tables tend to be more centered on design and only provide one-dimensional functionality. When you are shopping for a new piece for your house, look in both the bedroom and living room sections of the store. You might be able to find a nightstand that works perfectly in another room at the end of a couch.

Though the nightstand and end table may be similar in many ways, their origins and histories could not be more different.

Nightstands started from humble beginnings. They got their name in 1892 when they used to hide chamber pots before indoor plumbing becoming mainstream.

Mostly found amongst the wealthy and ruling classes, these nightstands provided little to no use outside of hosting the toilet. They were usually made in matching sets, found only in the master bedroom. The chamber pot would be placed inside, hidden away until the help emptied and replaced it in the morning.

The nightstands would have a shelf inside for the chamber pot and two doors that could hide it away. Some nightstands had a deep drawer instead of doors, but it was rare. There are still antique nightstands available to those who want an authentic experience. Frequently made of mahogany, they were decorated with elaborate painted designs and appliqued with gold leaf.

People learned that nightstands are a convenient spot to house their glasses and nightly candle as they became more common. Fortunately, nowadays, we can worry about storing things like a mouthguard or contact lens case and not the overnight toilet.

End tables can be traced back to ancient Egypt. Since then, they were usually made of alabaster or stone, but archaeologists have also found wooden end tables in tombs. They believed that the purpose of these short platform tables was to be a surface for eating and playing games on. Similarly, the Chinese used small tables for writing and painting.

In America, end tables were not noted in most households until the 19th century. Furniture was considered merely essential or functional for most people. Most people could not afford or imagine the need for a table that served a mainly decorative purpose in the house. For the wealthy, formalities dictated that most of the time be spent in front of a coffee or dining table.

In Europe, end tables were slow to become common because of the coffee table’s predecessor: the tea table. For most of history, food and drink were consumed in the area of the house where it was prepared. When tea became popular, the tea-table was shared by those partaking and placed centrally in the room, like the modern-day coffee table.

Fast forward to the mid 20th century and the common ownership of televisions. With much of the family interaction moving from the kitchen to the living room, end tables re-entered the scene. Now, there was the need for a convenient ashtray, a cup of Sanka, and, eventually, a remote. These days we couldn’t imagine an eight-hour Netflix binge session on the couch without our Diet Coke and popcorn within arm’s reach.

If you plan to invest in either a nightstand or an end table, you’re probably interested in outfitting your new furniture with some useful accessories. These lists may give you a few ideas about the usefulness of whichever type of surface you go for and how to maximize their effectiveness. Some of them are more funky than useful, but there is a little something for everyone.

For the new nightstand by your bedside, you could look into getting the following items or adding your personal touch:

Use small travel sizes of toiletries that will fit into a drawer to keep the clutter on the top surface at a minimum. (Always take precautions to keep medication safely away from children!)

Though you might be tempted to use an e-reader for reading in bed, opt for old school paperbacks and printed magazines that won’t mess up your slumber with a blue light that disrupts your wake-sleep cycles.

Nightstands don’t have to just be for hiding away the clutter of your bedroom. They are becoming popular as key design pieces in the bedroom, one of the rooms where we spend the most time. Whatever your aesthetic, from rustic to rocker glam, you are sure to find exactly what you’re looking for to complete the look.

Conversely, for an end table, you might consider the following accessories to make it feel like your own:

Feel free to get creative. When it comes to an end table, its versatility means that you can use it to hold virtually anything. Whether the things on your end table are useful objects or random things that make you happy is entirely your decision. End tables, unlike nightstands, don’t have to be tidy or valuable.

There are many examples of highly-sought-after end tables and nightstands. These are short lists of tried-and-true models recommended for readers looking for a change in the house or something to complete the room. No matter what aesthetic you are shopping for, these lists should give everyone something to love.

Depending on your desired aesthetic, your ideal end table might look entirely different from someone else’s. Whether you’re looking for something practical and down-to-earth, a functional storage unit, or a wild art piece in and of itself, here are a few options to peruse. Note that even they recommend a nightstand for one of the entries!

If you are looking for something with more storage to go by your bedside and keep you company during the night, this list has some ideas for excellent nightstands to keep everything within reach while you try to sleep the night away. No matter what kind of style or budget you’re working within, there are some great options for everyone here.

Though they are similar and have been swapped out for each other in recent times, nightstands and end tables evolved from significantly different origins and did maintain some of their differences. Nightstands have more practical features like storage and USB ports, while end tables are primarily used for their surfaces and nothing else.

link to End Table Vs. Coffee Table: What's The Difference?

Have you ever wondered about those tables in your living room? We all know about the end table, the side table, the coffee table, and the console table. It is hard to know what you need for your...

Continue Reading
link to Are Nightstands and End Tables the Same Height?

Nightstands and end tables are similar pieces of furniture, but one is meant for the bedroom, and one is meant for family and living rooms. Size is important, especially height since they need to be...