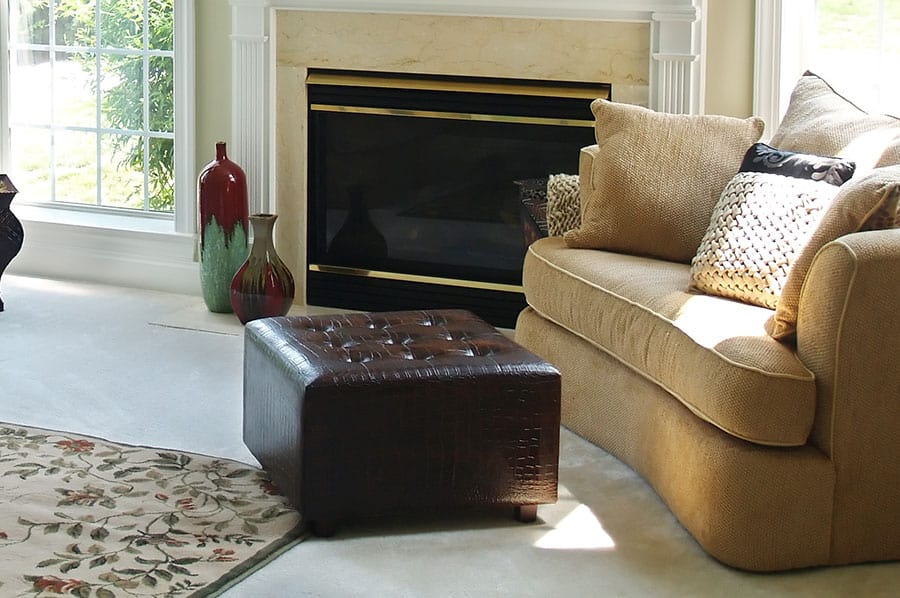 If someone came up to you and asked you what the difference was between an ottoman and a bench, would you truly know what to say? You might, but then again, you might not. If we were talking home décor, we might have an idea of what to look for if we are looking for that “just right” ottoman to make that living room recliner look a lot less average.

An ottoman is an upholstered sofa with no arms or back, and a bench is an elongated seating option, often made from wood or cement, although materials can vary. The main difference would be the way that we use them. An ottoman, particularly, is seen as a low stool that is generally used as a footrest, and a bench is mainly used for seating.

Still not convinced that ottomans and benches are two different pieces of furniture? Stick around. We have everything you need to know about ottomans vs. benches to help you know the difference instead of having to guess. Just keep reading.

What is the Difference Between an Ottoman and Bench?

There are a few key differences in ottomans and benches, mostly in how they’re used and where they came from. Up next, we’ll dive into those differences for a better understanding of each one’s unique design and origins. This will help you better understand which one will fit best in your space and how to use them to maximize their purpose.

Ottomans and benches are completely different. Or are they? They can be used interchangeably, as we said before. Simply putting it, an ottoman could assume the identity of a bench and vice versa.

Benches, as we said earlier, are elongated seating options, and ottomans can be made to match that length and be used as a bench. Don’t you think so? See the picture below and feast your eyes upon an ottoman being used as a bench, and very nicely, we could add.

The main thing that benches and ottomans have in common is their versatility. Although very much different, they have many similarities. Here’s a snapshot so you can get a better idea.”

So basically, ottomans and benches have multiple functions. Ottomans can be used for more than just resting your feet, and benches serve more of a purpose than for you to plop your derriere.

Ottomans have become more popular through the years and are often associated with premium prices and high-class interior design and staging. Benches can reach premium price ranges as well due to the multiple functions and finishes that they can offer.

Basically, you can either find a great bargain, build your own or be prepared to pay a pretty little penny for one that makes up a good amount of space in that special nook you may have that is ready for a new piece. There is nothing wrong with incorporating both pieces into your space, but sometimes the space you may be trying to give a little life to only has room for one. So, this is solely based on what the main purpose is that you’ll be using it for.

Ottoman vs. Bench: Which One Should You Choose?

Do you need to add some texture to a room? You might consider using an ottoman as a coffee table to give off that textured vibe and to add great contrast with a hard tray on top along with décor. Or maybe you have a large dining table that seats six. Why not replace two standard chairs with a bench and statement pillows?

Now those cogs are turning, aren’t they? Well, while we’ve got those design juices churning, let’s not forget that both can be used for not only indoors but outdoors as well. You might have a garden in your backyard that is just begging for dramatic stone bench pieces, or maybe your sunroom could use an all-weather-friendly ottoman in a pop of color!

Remember earlier when we found out that the original design of an ottoman was inspired by a sectional form? Well, if you want to go a little out of the box, you could think about that bonus room that you have and create the perfect u-shaped sofa with fabric ottomans to not only provide seating but open up the space in a new and adaptable way. The same could be done for your RV or your office. The possibilities are endless.

The Origins of Ottomans vs. Benches

The real difference in how each piece is used is actually rooted in its origins. Over time, benches and ottomans have morphed into more similar pieces, so let’s take a look at where they came from.

Did you know that the ottoman can be traced back to the ottoman empire? Not much thought went into naming it, did it? Did you know that the ottoman actually started out in a sectional design? Picture a standard room with four walls, and now imagine that three of those walls were lined with rectangular ottomans…. that were the original design. Mind-blowing right? The history of benches is even more interesting so keep reading.

The difference between an ottoman and a bench isn’t necessarily something that we just think up or want to know. But since you’re here, let’s spill the facts. Benches were the most common form of seating in medieval halls and were widely used by the Romans.

However, when you think of a bench, you’re thinking of a public bench or a long seating option for your living or bedroom.

That visual idea that you have right now kept it. Now, the person who invented that, that public bench that popped into your head; his name is Gabriel Davioud, a French architect from the 1850s.

Ottomans, however, were introduced to Europe by Turkey, which was the heart of the Ottoman empire if you weren’t already aware. Osman, I founded the empire, and the word ottoman derived from his name and basically the name of the empire. If you aren’t intrigued already, try this on for size…. the ottoman constantly morphed throughout history.

They went from being a sectional-inspired piece to more octangular and circular pieces, often with divided seating by arms in the center of them to house plants or knick-knacks. Then, we realized that we were missing out on the storage space and multifunctionality that it offered, so hinges began to meet wood to create lifting tops under the seating space. There’s your fact of the day; you’re welcome.

Now that you’ve had a little history lesson, done a little brainstorming for the vision board of your next living room redesign, and opened your eyes to the flexibility of basic furniture, we think you should go ahead and start shopping for the next addition to your space.

A few takeaways, though; if you’re using an ottoman as a stool, try to keep the height lower than the height of the chair. Remember that ottomans don’t have to be used as seating. They can be used as a tabletop, and don’t be afraid to utilize a bench in unusual spaces and with different finishes and décor to compliment the piece. They aren’t just for parks, gardens, and museums, you know. A lot of information? At least now, you’re in the know!

There are numerous reasons why you should put a bench at the end of your bed depending on the type of bed you have and the size of your room. From adding a sense of style to punctuating the end of...

Continue Reading
link to Ottoman Vs Hassock: A Comparison

Have you visited a furniture store looking for a footstool and came across ottomans and hassocks? This may be because the terms have been often used interchangeably, yet an ottoman and a hassock are...