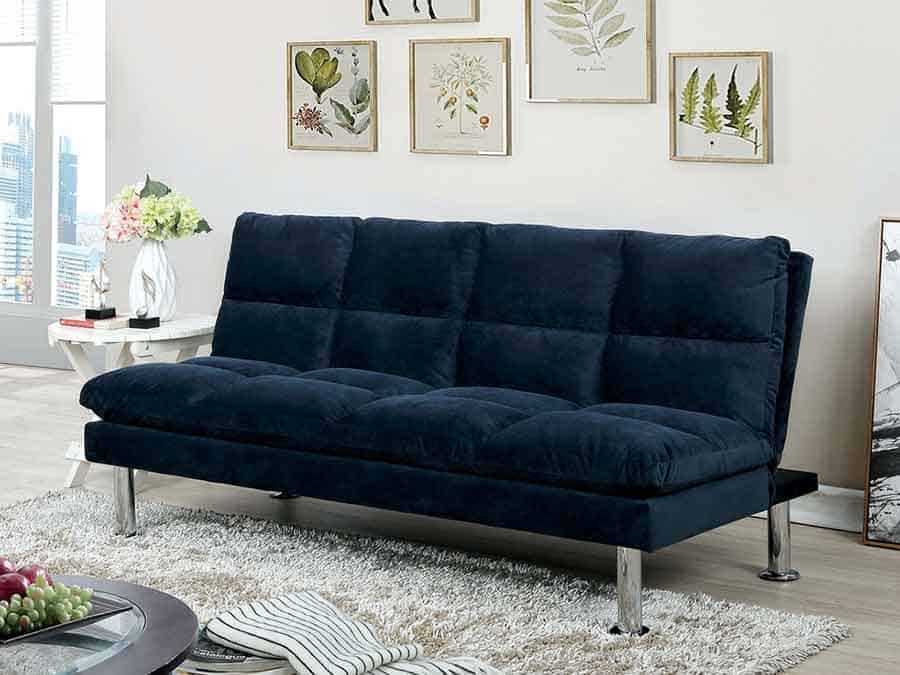 Futons are a popular option for people who want to add some bed capacity to their home, but many may wonder why futons are so low to the ground. It goes back to the history of futons and where their design came from.

Futons might seem like a modern furniture staple, but they’ve been around since the 1700s. Keep reading to learn more about the history of futons, why they’re so low to the ground, and the many benefits of sleeping on a futon.

The History of the Futon and Its Height

When you look at why futons are low to the ground, you first must look at where futons originated from. The modern futon sofa was influenced by the Japanese futon, which is a mattress that is placed on tatami mats on the floor for sleeping. The Japanese do not sleep on a bed frame, choosing instead to sleep directly on the floor.

Futon mattresses were originally designed to be used on the floor and then rolled up each day. But after being exposed to them in Japan, an American furniture designer named William Brouwer from Boston decided that futon mattresses could be incorporated into a sofa to expand a home’s sleeping capacity. The futon sofa bed was introduced to America in 1982. (Source: Bed Works)

There are a few reasons for this interior design choice (Source: Sleeping Guide):

As you probably gather, there are lots of reasons why traditional Japanese futons are designed to be low to the ground. And this went on to influence the introduction of the futon sofa in the Western world.

Because futons are light and simple, in the eighties, they were much cheaper and easier to store than other types of sofa beds. This made them appealing for a variety of demographics, including students who needed light furniture to move from place to place as well as people who needed to stretch apartment space in large cities.

Even though the futon mattress has been adapted for a Western audience, futons are still designed to be low to the ground. This is for a few reasons:

While futon sofas have deviated pretty drastically from the design of traditional Japanese futon mattresses, they are still designed to be lower to the ground than many Westerners are used to.

The Benefits of Futons

Futons have a mixed reputation because they are relatively cheap compared to other types of beds in Western interior design. But, just because they’re cheap doesn’t mean that they’re not a good option.

There are futons constructed of high-quality materials that work just as well in high-end interior design. On the other hand, there are also many economy futons designed for college dorms. The fact that you can easily find both is a testament to how versatile this style of furniture can be.

There is a Futon for Everyone

Whether you’re looking to add extra guest beds to a residence, or trying to save space in a studio apartment, futon mattresses and futon sofas are a low-profile way to sleep. Futons can be a great way to make the most of available bedroom space, due to its design that is not only attractive but easy on the back too.

link to Futon vs. Mattress: Is There a Real Difference?

We spend, hopefully, at least 8-hours of our 24-hour day sleeping and want to be comfortable during that time of rest.  There are very strong opinions about what the best mattress is for the...

Continue Reading
link to Futon Sinks in the Middle? Here’s What to Do

Futons were once a staple of college dorms, back when they were a simple frame and mattress. Most futons came with a metal frame and a solid colored cushion. Fast forward to today, when futons have...